In an effort to compete as a “news discovery platform,” the newest update to the Facebook News Feed Algorithm helps deliver more relevant news to its users, especially to users on the go, accessing Facebook from their mobile device.

Facebook reported that they’ve seen a 170 percent increase in traffic from Facebook to media sites over the last year. This significant spike has led Facebook to conclude that its users want to discover and consume more quality news within the platform.

How will they do this?

Facebook will look first at link clicks to determine the quality of a link, and second at the total of comments. Quality links will be “bumped” up in the news feed and will be more likely to appear to relevant users.

The more clicks and comments on a shared link, the more prominently it will appear in the news feed.

How do I know if my link is being clicked?

Don’t get discouraged if a link appears to be getting very little engagement, it could be getting a significant amount of clicks! To view the clicks on a link, open up the “Post” tab within Facebook Insights.

Check to make sure the engagement option that displays clicks has been checked.

Next, you can sort the posts based on the number of clicks each post received.

By clicking on an individual post, a “Post Details” box will pop up. Here you can view the number of clicks easily. Clicking to view a photo (in a photo post) is considered a click, so make sure you’re focusing on the “link clicks.” 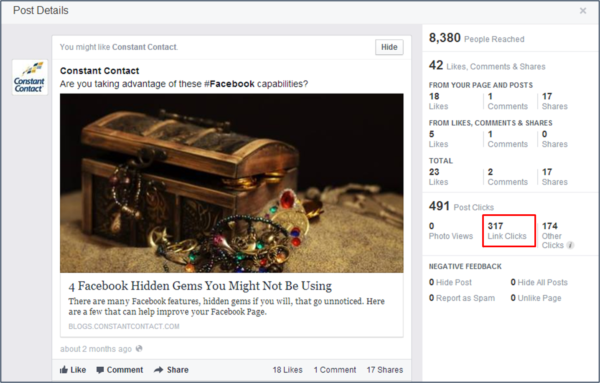 The Facebook News Feed Algorithm update will serve as a great opportunity for content developing businesses that create publications or blog content and you won’t need to change much. Try to encourage your fans to share their opinion on the article or ask a question related to the post to increase comments and give your link an extra boost.

Tip: Check to make sure the link you’re sharing is mobile friendly. Facebook is putting a greater emphasize on link clicks that occur in mobile.

What if I focus on sharing photos from my Facebook Page?

There is a chance the reach of your photos may be negatively impacted by the increased weight Facebook will now place on links. I suggest trying to rotate in a few links to articles within your content calendar and see how your audience reacts. Avoid linking to memes and encourage your fans to comment on your link by asking a simple but intriguing question relevant to the article.

Tip: Optimize the image that appears with the link you’re sharing. When you’re creating a link post on Facebook, the hyperlink pulls in the images from the post, so be sure to scroll through the images to choose which is the most eye catching. Don’t forget to also delete the hyperlink after the link preview is pulled into the post.

Recently, Facebook added the ability to upload your own image in a link post. I recommend uploading your own image at the Facebook recommended size of 1200×627 (appears as 400×209 in the news feed) or an image ratio of 1.91.:1. Links with larger images receive at least sixty-nine percent more link clicks. You can use Aviary or PicMonkey to create or crop images to the appropriate size. 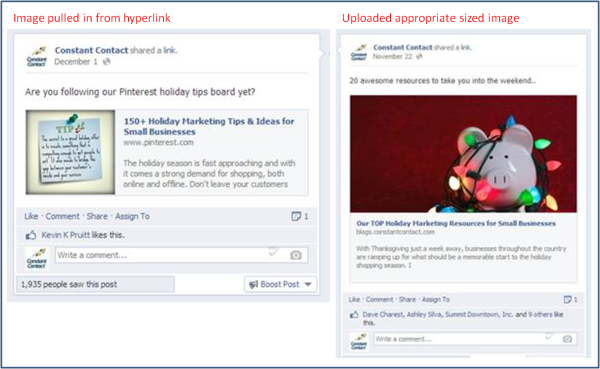 Personally, I was a little surprised by this update from Facebook. Contradictory to the statistics, my opinion has always been that people don’t look to Facebook to get their news.

The intention of Facebook users is to connect and converse with friends and brands in a more casual environment. Facebook wants to move away from displaying fun images such as memes, yet fun images when used appropriately, are the most engaged with content. Social media has also become increasingly visual across all social networks, including Facebook.

It will be interesting to see how Facebook users’ behavior changes.

Have additional questions about optimizing links for Facebook? Ask me in the comments below.

A hot housing market is a boon for realtors, and TikTok for real estate agents has the power to turn the tide of that never-ending competition Read More >>