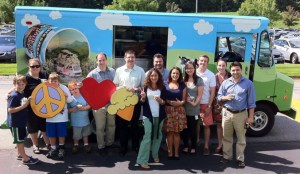 We all scream for ice cream at Constant Contact.

And yesterday, our hungry team received a nice surprise: The Ben & Jerry’s truck stopped by our Waltham office to serve us some free ice cream.

For the second year in a row, the company has been traveling around giving out tasty treats (other lucky cities this summer have included San Francisco, Los Angeles, Miami, and New York). Some locations on the truck’s tour are pre-set, but for a good number of them, Ben & Jerry’s is asking its fans to tweet their hearts out to get the truck to swing by their offices. That’s exactly what many at Constant Contact did.

And it worked; we all enjoyed some delicious Americone Dreamand other flavors.

The Ben & Jerry’s campaign revolved around a simple concept: It got people talking about the brand. And the more people talked up the brand, the more likely it was that they’d get something in return. Yes, there was an incentive involved, but Ben & Jerry’s generated plenty of “free” publicity just by asking people to mention it, and to do so in a light-hearted context (using the hashtag #OMGFreeBenJerrys made it even more fun).

Can you imagine how much goodwill and exposure the campaign generated in total, and how many people saw the Ben & Jerry’s name in their friends’ Twitter feeds?

Sometimes, social media marketing is as easy as getting people talking. You can encourage your Twitter followers to mention you in a tweet for a chance to win a prize of your choosing. The more they talk you up, the better their chances. But you don’t have to offer an incentive. Just ask your followers a question, such as which of your ice cream flavors is their favorite, or what is their biggest business or personal challenge (or something more appropriate to your business or organization).

You don’t always have to share an email, article, blog post, video, or photo on social media to get people to engage with your brand. You just have to get people talking with you and with each other.

When’s the last time you got your customers, clients, and members talking? What did you ask them to say? Share your thoughts in the comments below.

Martin Lieberman develops content for small businesses and nonprofit organizations, including tips and advice on how they can be better marketers. When he's not writing and editing, Martin loves going to the movies and watching Red Sox games.

I love a good video and I’m willing to bet your subscribers do too.  Videos give email campaigns an element of interactivity that can Read More >>