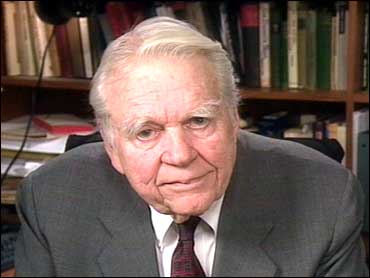 America lost one of its greatest and most esteemed journalists last week, Andy Rooney.

I grew up watching Rooney and always loved his commentary on CBS’ 60 Minutes. He had an amazing ability to point out the obvious and absurd. He will certainly be missed.

However, commemorating the life of Andy Rooney is not why I’m writing this post. Having watched much of the news coverage about Rooney’s life this past weekend, I realized there is something very important that small businesses can learn from him. In Rooney’s last appearance on60 Minutes, he said he didn’t consider himself a television personality or celebrity. Rather, he said, “I’m a writer.” That’s how he started and ended his lengthy career — as a writer.

So here’s what we as business owners can learn: Rooney knew what his core business was: his writing. No matter what form or medium, he was a writer. He always stayed focused on what he did best.

Most of us start businesses based on what we’re good at, and that becomes our core product. Yet, it’s easy to get distracted. It’s common for new business owners to try to be too many things to too many people. As a result, they lose their focus and that often causes their businesses to fail.

I get it. You want to bring in as much business as you can in those early days. You need the money, right? But too much of that can derail your success.

Another important thing to remember is when you say yes to one thing, you effectively say no to something else. You simply can’t do everything — something has to give. Focusing on your core business helps you stay on track and allows you to better analyze opportunities.

When I was in my late twenties, I launched a public relations and advertising firm. I faltered initially because I needed to build revenue, so I took on projects that were unrelated to marketing, such as meeting planning and even some administrative work. Because of those projects, I had little time to grow my marketing business. But I quickly realized in order to succeed, I need to regain my focus.

Andy Rooney was a writer. Plain and simple. What is your core business? Stay focused. You can’t be all things to all people.

Driving sales in B2B companies is a high-effort and high-reward activity.  And lead generation plays the most crucial role in enabling Read More >>

Reaching potential buyers in the real estate world is what it’s all about. Unlike many other industries, real estate leads often start Read More >>