The press release has been a mainstay of public relations since its inception decades ago.

And while it may seem a bit old-school to some, there’s a reason press releases have stood the test of time — they’re effective and produce results.

From generating media coverage to positioning yourself as a thought leaders in your industry, and ultimately help your business succeed and grow — there are a number of reasons why business owners need to learn how to write and distribute a press release.

Today, I’ll focus on part one of that process: how to write a press release.

If you’re trying to decide whether or not something warrants a press release, all you need to do is answer one question: Is it newsworthy?

For something to be newsworthy, it must be something that audiences outside of your internal organization will care about; something that has significance to a reporter and their readers, viewers, or listeners, or to other external stakeholders (potential investors, etc).

Here are a few factors to consider when determining if something is newsworthy:

Now that you know when to write a press release, let’s take a look at how you actually do it.

The headline should be attention grabbing and encourage the reader to want to know more, while also being explanatory. This isn’t the time to use vague language.

Formatting tip: Make sure the headline is written in bold and the subhead is italicized.

The body of your press release should stay as concise as possible, while making sure to get all of the important information across in an engaging manner. Reporters that read your release aren’t likely going to have the time to read page after page trying to understand the news. 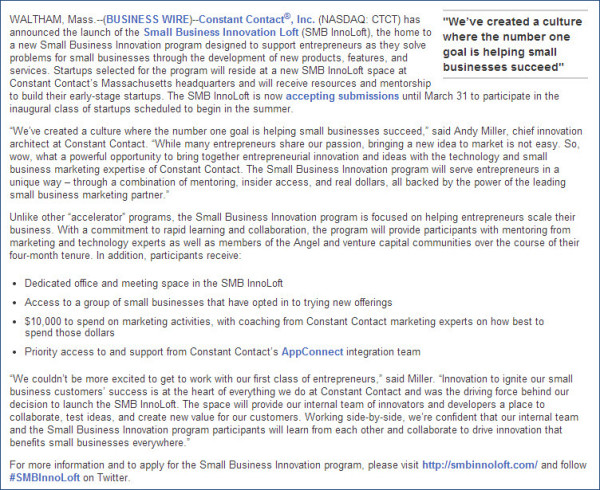 Here are other things to keep in mind when pulling together the body of any press release:

This is the about us section where you provide background on your organization. It should be included following the body of every press release. The language used here can be the same in every release. Don’t forget to link to your company homepage to drive readers back and provide more information.

A reporter reads your press release and is interested in getting more information — great! But how will they know where to go?

Be sure to include relevant contact info for any inquiries that may arise from your press release.

This information should be listed at the very end of the release.

It doesn’t begin and end with creating the press release.

Keep in mind that while a well crafted press release is the foundation of a great public relations campaign, your efforts should not begin and end with the creation of the release.

Press releases work when you get their information in the right hands (reporters, other stakeholders) that will further extend the reach of your news, ultimately resulting in measurable business success.

Stay tuned for part two, where I’ll explain how to distribute and get results from your press release.

Have other questions about writing a press release? Post them in the comments below.

Getting Started with SMS Text Marketing

Brand identity has always been important, but it’s even more important in the mostly-digital world we live in today. Everyone’s personality Read More >>

For retailers, the holiday season is one of the busiest of the year. As people shop for gifts, groceries, home décor, and other items to make Read More >>

How to Decorate Your Online Marketing for the Holidays

When you’re marketing for a small business, you’re at least a month ahead of everything else. Or at least you try to be.  Yet, here Read More >>